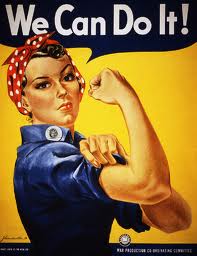 Of course! But stereotypes about leadership still pose barriers to women’s advancement.

So much has changed since 1963, when Betty Friedan’s influential “The Feminine Mystique” provoked a national discussion about the deep dissatisfaction women were feeling about the limitations of their lives. Many women came to believe that discrimination limited their opportunities, especially in relation to leadership roles.

But a new Northwestern University meta-analysis (an integration of a large number of studies addressing the same question) shows that even today leadership continues to be viewed as culturally masculine. Thus, women suffer from two primary forms of prejudice.

Women are viewed as less qualified or natural in most leadership roles, the research shows, and secondly, when women adopt culturally masculine behaviors often required by these roles, they may be viewed as inappropriate or presumptuous.

These reactions to women leaders reflect gender stereotypes. Previous research found that predominantly “communal” qualities, such as being nice or compassionate, are associated with women, and predominantly “agentic” qualities, such as being assertive or competitive, are associated with men.  It is these agentic qualities that are believed to be essential to successful leadership. Because men fit the cultural stereotype of leadership better than women, they have better access to leadership roles and face fewer challenges in becoming successful in them.

The good news for women is that the project’s analyses indicate that this masculine construal of leadership is weaker now than it was in earlier years. Despite this shift toward more androgynous beliefs about leadership, it remains culturally masculine — just not as extremely so as in the past. However, this masculinity lessens somewhat for lower-level leadership positions and in educational organizations.

The implications of the meta-analysis are straightforward, said Alice Eagly, professor of psychology and faculty fellow in the Institute for Policy Research at Northwestern and a co-author of the study.

“Cultural stereotypes can make it seem that women do not have what it takes for important leadership roles, thereby adding to the barriers that women encounter in attaining roles that yield substantial power and authority."

“Women’s experiences will differ depending on their culture,” she said. “We would like to have more data from different nations, and also sub-cultural data within the United States that takes race and social class into account, but that’s something to look to in the future.”

The project “Are Leader Stereotypes Masculine? A Meta-Analysis of Three Research Paradigms” is in the July issue of the Psychological Bulletin.

My wife will love this. She always talk about how women are always seen as inferior.
Thanks for the heads up. I'm sharing this with my network!