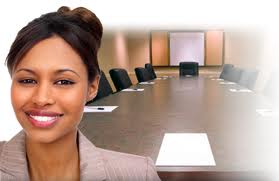 A higher proportion of women on a company’s board leads to greater opportunities at the executive level for women, according to new research.   Despite continued gains in low- to mid-level management positions, women still struggle to break through the corporate glass ceiling and attain coveted top-management positions. Today, women account for nearly half of the nation’s overall workforce, but hold only 6 percent of corporate CEO and high-level executive roles. New research from the Kellogg School at Northwestern finds that one key to women’s career advancement may lie in the gender makeup of a company’s corporate board.

The research examines female representation on corporate boards and its subsequent effect on the gender composition of the company’s top management positions. According to the study, a higher representation of women on a company’s board of directors directly increases the female share of and access to higher positions within the company.

“Unfortunately, there are still institutional gender barriers in today’s workplace that prevent women from holding high-level executive positions,” said David Matsa, assistant professor of finance. “Our research uncovers the impact of ‘women helping women’ at the highest level of company leadership. Women who hold board positions have a unique opportunity to propel their female colleagues into executive roles, so in effect, when women’s share of board seats increases, their share of top-level positions also increases.”

Matsa, with co-author Amalia Miller of the University of Virginia and the RAND Corporation, a nonprofit research organization, analyzed data about corporate board members and top executives for a large panel of publicly traded companies from 1997 to 2009.

“In addition, we found that as a board’s gender composition evolved and increased its number of female seats, over time the likelihood that these boards would select female managers also increased,” said Matsa. “However, this gender shift can take multiple years. Our research shows that while the female share of board seats may increase the desire to hire other female executives, there is a lag time for women to achieve these roles, probably because the positions are currently occupied by qualified candidates.”

Interestingly, the researchers noted that the reverse situation is not true: Having female executives in top roles did not impact the gender makeup of corporate boards over time. This implies that female board membership typically precedes shifts in executive positions held by women, but not vice versa.

“Overall, the results show that women are each other’s best advocates, and by helping one another they have the potential to make remarkable gains in today’s workforce,” said Matsa. “When women are seated at the highest levels in corporate America, they are in a unique position to serve as mentors to those below them and to create more opportunities for female leadership and management roles.”

The study, “Chipping Away at the Glass Ceiling: Gender Spillovers in Corporate Leadership,” will be published in the May 2011 issue of The American Economic Review: Papers and Proceedings.

I think the statistics are misleading since many women that would be executives opt to start their own business and are small business owners rather than working for large companies. I believe small business ownership among women has increased. Therefore there are less women climbing the corporate ladder.
Wow - great study. Interesting that it takes women on the board to bring about the change and not just getting women in executive positions. I'm sharing this with my Girls Can't WHAT? network. Thanks.
I know that the number of women in higher level positions was less than men, however, I was very surprised to find that women only "hold only 6 percent of corporate CEO and high-level executive roles." I feel that if there was more of a 50/50 split in these positions with men, that perhaps our country would be so much better. I also agree that women in these positions would be able to be a great role model for other women in the company too.
The research also shows just how slow change takes place and for further gains to be made, women will have to continue to hold the course. At the same time, at least in my opinion, the corporate world, while still extremely competitive, is more accepting of women at executive levels. Things are changing to allow greater opportunity. But as the study also says, women are going to have to be conscious mentors of each other to allow more opportunities for those that have the ability but need a bit of inside help to get over the top
Great post! I agree with Jared! very surprising that “hold only 6 percent of corporate CEO and high-level executive roles.” those numbers are small nowadays and show that sometimes our society is close minded.
Very good post! YEs. Women maybe have better advocates than men but we cannot deny the fact that both can share many good things to the society...
I find many more women are owning their own business, thereby avoiding the politics of a job. Owning their own business puts them on a level playing field where they call the shots and then win or lose based on performance in the marketplace.
With major Fortune 500 companies - even Fortune 1000 companies, women will have a hard time climbing up the corporate ladder. It's a sad statement but it's relatively true. And when a woman does get elected to CEO of a major company, it's headlines. For example, IBM just promoted a new CEO and it was a female, Virginia Rometty. One such headline says: "IBM appoints first female CEO". As time progresses, more women will become the head of major companies and corporations but it will not happen over night. A lot of women, I've noticed, have been starting their own companies - especially companies in the baby space. I've been to many trade shows with my wife in the toddler industry where most owners are female. Maybe a lot of public companies are not promoting women but that should not discount the number of women entrepreneurs starting and maintaining a small business.
Great post! I agree with Jared! very surprising that “hold only 6 percent of corporate CEO and high-level executive roles
It seems as if us girls will never get ahead, but I may have some tips: When men can recognize that we are intelligent, level headed, they do the best with us. They know by nature that we are intuitive, ergo making great financial decisions. However it's that often times we are seen as weaker. We shouldn't hold on to that, rather we should embrace the fact that we have a calm to us, and are able to manage a family and a full time career, ergo being able to juggle like pros in upper management.
That is a lot lower than I thought. I knew that men held more high-level positions but I didn't really it was that overwhelming. I see the percentage of females in executive positions rising though. Great post.
I'm a magician and I recently performed at an event celebrating International Women's Day (8 March). One of the subjects that came up was an inquiry by the UK government, headed by Lord Davies, into the problems women face in attempting to scale the corporate ladder. The initiative recommends that FTSE 100 companies should aim for a minimum of 25 per cent female representation by 2015. Sounded like a very worthwhile programme.