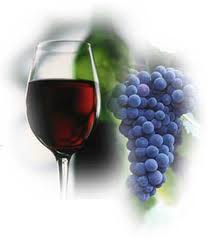 Two scientific articles in the July 2010 issue of American Journal of Clinical Nutrition shed more insight on the chemistry of red wine that may explain why more doctors are suggesting that a little red wine may be heart-healthy.  Both articles focus on resveratrol, a chemical compound found in certain plants. It is called a phytoalexin because plants naturally produce it as an antibiotic substance to fight both bacteria and fungi. Plants containing resveratrol include the grapes and skins of grapes that produce wine, raspberries, mulberries, blueberries and cranberries.  There is growing evidence that resveratrol plays a role in plaque development, fatty tissue growth, and other biological mechanisms that impact the cardiovascular system.

In the first article by Fischer-Posovszky et al reported that resveratrol influences adipose (fatty) tissue mass.   Laboratory tests on human cells in vitro showed that resveratrol  blocked immature fat cells from developing and differentiating affecting the fat cells' ability to function.  These findings indicate that resveratrol might interfere with obesity and other metabolic effects that  could increase the risk of cardiovascular disease.

According to an editorial in the same journal, these findings may suggest that moderate wine consumption provides cardiovascular protection.  However, these findings also raise further questions about whether red wine (resveratrol) can reverse or attenuate established heart disease.    Human clinical trials are needed to substantiate these findings.

While we recognize the concerns about alcohol addiction, a surprising number of reports have come out in favor of moderate red wine drinking.  In fact, a recent report suggested that a periodic glass of wine during a normal pregnancy may be helpful to the mother.   It's hard for a layperson to determine what is hype and what is true.  I recently came upon a website run by the Institute on Lifestyles and Health at Boston University that critiques many of the studies that discuss the benefits and risks of alcohol.   It's web site can be found HERE.

I often wonder whether or not wine really has a positive impact on your body. Sure there are things like resveratrol in wine, but there is also alcohol which has no positive benefits. Aren't there other sources for resveratrol?
Excellent points, but isn't fetal alcohol syndrome still an issue with allowing pregnant women red wine? Can't grape juice be used in place of wine? Isn't the resveratrol content of juice the same as wine?
What a refreshing &amp; moderate take on the red wine debate! I am very concerned with the constant nannying which we are all being put under. We aren't all alcoholics or drug addicts so why should we all be tarred with the same brush? It's the same old story isn't it? Moderation, moderation, moderation in everything we eat, drink and do - that is the answer.
I am not sure but I think there are articles written about resveratrol and weight loss. Why French people eat such fatty food but are not as overweight as Americans.
I just want to point out that when it comes to varying cultures (French, Japanese, Italian, etc.), there are many factors that play into why they have the medical histories that they have. Japanese, before the real Americanization of their cuisine, had very low incidents of obesity, low percentages of heart disease, and terrible bone issues. The point is, there are many inputs to get an output. A single one, like French drinking red wine, is not nearly enough to draw a conclusion that you attribute to that wine.
I completely agree with Christy, a glass of wine a day is just like the old saying of an apple a day keeps the doctor away. thank you, great post.
French citizens seem to live longer and have more life enjoyment than Americans. I know moderate red wine consumption is part of their daily routine. i believe it can be quite healthy in moderation
Red wine is definitely good for your health. Just remember to have 1 glass a day...
As many others have said, you can't link longevity with wine drinking by looking at national life expectancies of wine drinking countries. Too much variance. There are enough reputable studies done on the health benefits of red wine to somewhat prove it is true anyways.
The key of benefits of wine instead other alcoholic drinks or non alcoholic is because wine is done with only natural procedures that preserve the healthy propierties of the grape. No additives, only natural. Even in some fruit juices also add some preserving. But dont forguet, drink with moderation! EDITOR'S NOTE: What about sulfites??
It's all about moderation is everything, much less drinking of red wine. If it truly is beneficial for the heart -- why not. I read an article once about eating for pleasure (which is the bad side of eating). Eating in itself is not bad because we need the nourishment that it gives. However, eating for pleasure instead of eating when hungry is not good. The same way with drinking <b>red wine,</b></a> If we do it for pleasure than what is necessary each day, then it defeats the purpose of it all.