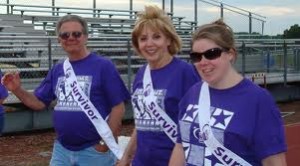 When people finish treatment for cancer, they want to bounce back to their former vital selves as quickly as possible. But a new Northwestern Medicine study -- one of the largest survivor studies ever conducted – shows many survivors still suffer moderate to severe problems with pain, fatigue, sleep, memory and concentration three to five years after treatment has ended.

“We were surprised to see how prevalent these symptoms still are,” said study co-investigator Lynne Wagner, an associate professor of medical social sciences at Northwestern University Feinberg School of Medicine and the Robert R. Lurie Comprehensive Cancer Center. “This is one of the first looks at what’s really happening for survivors in terms of symptoms and treatment among community-based treatment settings across the U.S.”

The persistent pain in survivors who are cancer-free and no longer receiving any treatment is particularly puzzling, Wagner noted, because good treatment exists. “It seems we haven’t come a long way in managing pain despite a lot of medical advances, ” she said. “This is eye opening. It tells us we need to be better in clinical practice about managing our survivors’ pain.”

Cancer survivors seem to slip through the cracks in healthcare in terms of getting treatment for their pain and other symptoms. “We don’t have a great system to provide care to cancer survivors,” Wagner said. “Cancer survivors are left trying to put the pieces together to find optimal care. They ideally need to see someone who is knowledgeable about the long-term affects of treatment.” She pointed to the example of the STAR (Survivors Taking Action & Responsibility) Survivorship Program at Lurie Cancer Center, a comprehensive long-term follow-up program for survivors of pediatric cancer.

The study included a sample of 248 survivors of breast, colorectal, lung and prostate cancer. The survivors were primarily female and white, and most were more than five years post-diagnosis. They also had been treated in community settings -- where 80 percent of people with cancer are treated in the United States -- as opposed to academic medical centers. This group best represents the typical experience of cancer survivors around the country, Wagner said.

The most common symptoms reported by survivors were fatigue (16 percent), disturbed sleep (15 percent), cognitive difficulties (13 percent) and pain (13 percent.)  Survivors need education programs for transitioning from treatment to life as a cancer survivor, and this education should include skills for managing these difficult and chronic symptoms, Wagner said. Medical providers also need to be educated about survivors’ lingering symptoms.

“It is acceptable for someone actively going through cancer treatment to have pain medications, but when they transition to being survivors, that acceptance goes away,” Wagner said. “If they ask for pain medication again, doctors may worry that they are getting addicted.“

The study also pointed out the need to develop better ways to address sleep problems, fatigue and lasting difficulties with memory and concentration. Non-drug interventions for improving sleep are effective, Wagner said, and researchers need to tailor these for cancer survivors. Exercise is the most effective weapon against cancer-related fatigue, but it’s challenging to adhere to an exercise regime when you don’t feel well. “We need to see how we can be more effective in promoting physical activity among survivors,” Wagner said.

Researchers also documented any treatment interventions for study participants’ symptoms and then repeated an assessment of the symptoms four weeks later.“We generally found the same severity of these symptoms one month later, suggesting they tend to be chronic,” Wagner said.  Participants concluded more research was needed on the prevalence of these symptoms.