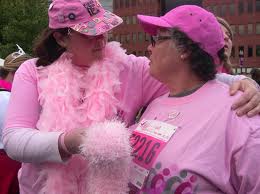 Why do so many postmenopausal women who are treated for estrogen-sensitive breast cancer quit using drugs that help prevent the disease from recurring?

The first study to actually ask the women themselves -- as well as the largest, most scientifically rigorous study to examine the question -- reports 36 percent of women quit early because of the medications’ side effects, which are more severe and widespread than previously known. The Northwestern Medicine research also reveals a big gap between what women tell their doctors about side effects and what they actually experience.

“Clinicians consistently underestimate the side effects associated with treatment,” said lead investigator Lynne Wagner, an associate professor in medical social sciences at Northwestern University Feinberg School of Medicine and a clinical psychologist at Robert H. Lurie Comprehensive Cancer Center. “They give patients a drug they hope will help them, so they have a motivation to underrate the negative effects. Patients don’t want to be complainers and don’t want their doctor to discontinue treatment. So no one knew how bad it really was for patients.”

The symptom most likely to cause women to stop using the drugs was joint pain. Other side effects women reported as compromising their quality of life were hot flashes, decreased libido, weight gain, feeling bloated, breast sensitivity, mood swings, irritability and nausea.  The drugs, aromatase inhibitors, stop the production of estrogen in postmenopausal women, whose breast cancer cells are stimulated by estrogen. About two-thirds of breast cancers are estrogen sensitive, and aromatase inhibitors reduce the recurrence of cancer in postmenopausal women.

The women at highest risk for quitting the medications before the recommended five years are those who still are experiencing residual side effects from recent chemotherapy or radiation therapy when they start the aromatase therapy, according to the study. Women who had surgery for breast cancer but not chemotherapy or radiation therapy, or who weren’t taking many other medications, were more likely to keep taking the aromatase medication.

“The more miserable they were before they started, the more likely they were to quit,” Wagner said. “By the time they get through chemotherapy or radiation, they have to face five more years of another medication that will make them feel lousy. They feel like they already lost enough time to cancer and have reached their threshold for feeling bad.”

“This is a wake-up call to physicians that says if your patient is feeling really beaten up by treatment, the risk of her quitting early is high,” Wagner said. “We need to be better at managing the symptoms of our patients to improve their quality of life.”

The new research exposes the disparity between clinicians’ reporting of side effects and women’s actual experiences. In a previous study, clinicians reported 5 percent of their patients experienced moderate to severe symptoms as a result of taking aromatase inhibitors. The new Northwestern study surveyed 686 women with a detailed questionnaire about their symptoms before treatment and at three, six, 12 and 24 months after starting treatment. The researchers found after three months of treatment that 33 to 35 percent of women had severe joint pain, 28 to 29 percent had hot flashes, 24 percent had decreased libido, 15 to 24 percent had fatigue, 16 to 17 percent had night sweats and 14 to 17 percent had anxiety. These numbers increased as women were on treatment longer.

Earlier studies also asked women to recall their symptoms after treatment ended, which is less accurate than reporting them at regular intervals while taking the drugs.

As a result of the side effects, 36 percent of women ended treatment before an average of 4.1 years. After two years, 10 percent had quit; the remainder quit between 25 months and the 4.1 years.

“These findings can help us identify women at risk for quitting the therapy, counsel them about the importance of staying on it and provide treatment for troubling side effects,” Wagner noted.

Weight gain can be addressed with nutritional counseling, while mood swings and irritability can be treated with cognitive behavioral therapy or mind-body techniques, Wagner said. Joint pain can be tempered with nonsteroidal anti-inflammatory drugs, or women may be switched to a different hormonal medication. Nausea can be reduced with medication.

Can't get enough of these studies. Is there more on this site? Really would like to contribute in any way, even if it's only through these comments.
Some women may skip doses of Femara which reduces estrogen in women with estrogen sensitive breast cancer. Femara tends to cause painful hands and some women find it very uncomfortable.
The side effects of cancer medication are often overlooked and it is understandable why people skip a course. Although skipping medication once or twice won't do too much harm, it is better to stick to a program to avoid long term consequences.