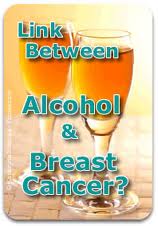 An analysis among more than 40,000 postmenopausal women who were in the California Teachers Study was carried out to determine if there were differences in risk of breast cancer among women consuming alcohol according to their previous or current use of hormone therapy (HT).  In the cohort, 660 women were diagnosed with invasive breast cancer during follow up.

Results showed an increase in risk of breast cancer among alcohol consumers of more than 20 grams of alcohol per day (about 1 ½ to 2 typical drinks) who were current users of HT but not among those who were ex-users of HT.  The authors conclude: “Following the cessation of HT use, alcohol consumption is not significantly associated with breast cancer risk, although a non-significant increased risk was observed among women who never used HT.  Our findings confirm that concurrent exposure to HT and alcohol has a substantial adverse impact on breast cancer risk.  However, after HT cessation, this risk is reduced.”

Forum reviewers considered this to be a very well done analysis on a large group of post-menopausal women with repeated assessments of alcohol consumption and HT use.  However, results from even very large studies on the relation between alcohol, HT, and breast cancer risk have often been conflicting.  Even with numerous studies on this topic, we still have very poor predictors of which women will develop breast cancer.  There is some increase in risk for women with a family history of such cancers and those who are obese.  However, the percentage increases in risk associated with HT, alcohol consumption, and other environmental factors are generally small (unlike the many-fold increase in the risk of lung cancer among smokers in comparison with never smokers).  This may explain why the results of individual studies may reach apparently conflicting conclusions.  While the present study suggests that women who consume alcohol may have a decrease in their risk of breast cancer if they stop taking hormone replacement therapy, our current understanding of factors affecting breast cancer risk remains quite inadequate.

The risk of breast cancer increases in those women's who consume alcohol every day. This is proven by the studies done over it. Now a days breast cancer is becoming a very serious problem. So by taking proper precautions we can reduce the risk of cancer.