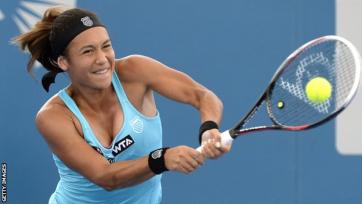 With the women’s soccer World Cup and Wimbledon tennis tournament recently ending, it’s time to consider a women’s health and sport topic that has long been considered taboo - female athlete menstruation. This past January, British professional tennis player Heather Watson made headlines during the Australian Open after citing menstruation as a factor in her first round loss. In a post-match interview, Watson talked about how she had been experiencing dizziness and nausea during the match, and stated “I think it’s just one of these things that I have, girl things.” This drew immediate praise from other female athletes, including former number one British tennis player Annabel Croft, for Watson speaking up about an issue all female athletes encounter, but is rarely mentioned. In fact, some consider it one of the last taboos in sports.

There are several reasons this may be the case. First, all women have different symptoms during their periods, leading some to have serious side effects, while others may have no symptoms. Croft believes that if women’s sports were televised more frequently, the topic would possibly arise more often. Additionally, some believe that if the topic became more talked about, women may use menstruation as an excuse for poor performance. However, the fact remains that this is a health issue that most female athletes at all levels must compete with.

Increasing discussion about athlete menstruation, and getting the topic out in the open will benefit players, coaches and teams. When female athletes feel comfortable talking about their periods, it will become less of a taboo subject, and players and coaches can work to minimize symptoms and help players continue to perform without embarrassment or illness.