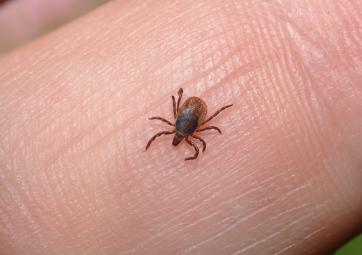 Planning on hiking, camping, or gardening this summer? If so, be careful of ticks and Lyme disease! The Centers for Disease Control and Prevention report that there were over 30,000 cases of Lyme disease in 2013, a number that is estimated to grow each year.

Lyme disease is a tick-borne illness caused by the bacteria Borrelia burgdorferi. Infected ticks spread the bacteria by biting animals and people. The two types of ticks that carry Lyme disease in the United States are Deer ticks, which are primarily found in the Northeast and the Midwest, and Western black-legged ticks, which are found along the Pacific coast. These ticks are brown and can be very small – often they are around the size of the head of a pin – and often attach to moist or hairy areas of the body.

In order to contract Lyme disease, a tick carrying the bacteria must bite you. In general, the tick must be attached for between 36 and 48 hours in order to transmit the disease. The bacteria enter your body through the bite, making its way into your bloodstream.

This disease is also known as “The Great Imitator” because its symptoms mimic a host of other diseases and it affects more than one system in the human body, including skin, joints, and the nervous system. Early signs and symptoms of Lyme include a rash in a bull’s eye pattern that has a red outer ring surrounding the site of the tick bite. This rash may also be found on other parts of your body, not just where the bite was. Other early symptoms may mimic the flu, including fever, chills, sweats, muscle aches, fatigue, nausea, and joint pain. Later symptoms, which develop several weeks after you’ve been infected, include severe joint pain and neurological problems such as temporary paralysis of one side of your face or impaired muscle movement. If left undiagnosed or untreated, the disease may become late-stage or chronic. The disease can spread to other parts of the body and can cause neurological symptoms, cognitive defects, chronic joint inflammation, and heart rhythm irregularities.

The best ways to protect yourself from Lyme disease are to avoid heavily wooded, bushy areas where ticks live, and wear long pants and long sleeves when walking through these types of areas. Check yourself, your kids, and your pets for ticks regularly, especially after spending time in the woods. Since ticks can be the size of a poppy seed, make sure to search carefully and thoroughly. If you find a tick, remove it as soon as possible by gently getting ahold of the tick with tweezers and pulling it carefully away from the skin. Don’t squeeze or crush the tick. If you think you’ve been bitten by a tick and start to experience symptoms of Lyme disease, contact your doctor immediately!