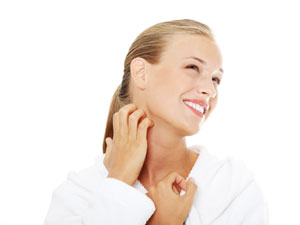 You may have heard of swimmer’s itch—it’s an itchy skin rash that occurs after swimming in fresh shallow waters during the early summer. Maybe your kids have come home from camp with an itchy rash in areas their bathing suit didn’t cover them? Even though swimmer’s itch is reported worldwide, most cases in the US occur in northern states, particularly in those bordering the Great Lakes, including Illinois.

Swimmer’s itch occurs when larval stages of certain microscopic flatworms, called “cercariae,” leave their temporary host (freshwater snails) in search of their definitive host (waterfoul and certain mammals), but instead come into contact with humans. We can’t see cercariae in the water, since they are microscopic. Once a person comes out of the water, larvae burrow into the skin as water evaporates and die within the skin shortly after. Rather than producing an infection, dead larvae are recognized as foreign proteins by the immune system, inducing the development of an allergic reaction manifesting as a skin rash.

Swimmer’s itch initially manifests with a tingling skin sensation, followed by the development of small, reddish skin spots. These are generally short-lived and give rise to raised, reddish bumps. The later can become intensely itchy, and may last up to 15 hours, and can then turn into blisters. Blisters disappear within 2-3 days, leaving residual dark spots, which eventually fade away within a month or longer.

Here are some tips to minimize risk of getting swimmer’s itch:

1. It is important not to feed water foul to prevent them from accumulating in water areas frequented by people.

2. While swimming, try to avoid swimming close to the shore, as cercariae tend to get drift to the shore.

3. The longer you spend in infested waters, the greater the likelihood cercariae enter your skin. Swimming for extended periods of time should therefore be avoided.

4. Finally, since cercariae burrow as water evaporates from the skin, toweling off immediately after emerging from the water may prevent this from happening.

Most cases of swimmer´s itch do not require specialized medical attention. Applying cool compresses to affected areas may relieve symptoms. Nevertheless, if itching is severe, you may seek medical attention from a dermatologist. In most cases, topical steroids may accelerate resolution of skin lesions, whereas oral antihistamines may be useful in reducing itching.