For over a decade, the Women’s Health Science Program at Northwestern University has supported young women interested in pursuing careers in science and medicine by providing academic support, hands-on laboratory training, and access to role models and mentors. The continued success of the program is exemplified by its alumnae, who refer to themselves as  “Science Sisters,” the entirety of whom have gone on to pursue college degrees, with over 80% of those in science, technology, engineering, mathematics, and medical (STEMM) fields.

British Griffis, a 2011 alumna of the WHSP program Oncofertility Science Academy, is one such notable example. After attending high school at Young Women’s Leadership Charter School on the near-south side of Chicago, British pursued a degree in agricultural biotechnology at the University of Kentucky. Currently, she is serving as a Peace Corps volunteer in Nepal, providing technical training on updated agricultural practices, along with nutritional and health education, to rural communities.

In addition, British plans to partner with local schools to provide access to updated STEM education and training.  Her motivation to do so draws from her high school experiences.  “My high school afforded me various resources to explore science such as Northwestern University’s Women’s Health Science Program,…[which] were a driving force that led me to pursue a degree within the sciences,” she says.  “I plan to pay it forward and empower youth around the world to explore STEM and become leaders in science by working together to create solutions.”

British intends to host her own version of the Oncofertility Science Academy in Nepal using the Northwestern curricula.  “The OSA program allowed me to view science through a lens I never would have been exposed to. Learning about technological advances such as the da Vinci surgical simulator and the mechanisms of in vitro fertilization were a memorable experience…critical to me furthering my academic career within the field of science.”

Together, the Women’s Health Science Program and the Baxter Center for Science Engagement are working together to support British’s work by donating laboratory equipment, classroom-ready teaching modules, and various science items and books. Plans are in development to establish virtual classroom exchanges between the local school students in Nepal and NU to provide virtual access to research laboratories and role models. For more information about how you can support British’s project, please contact the Women’s Health Research Institute at womenshealthresearch@northwestern.edu. 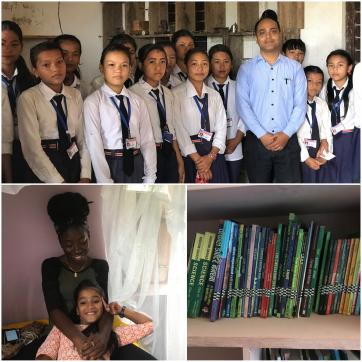