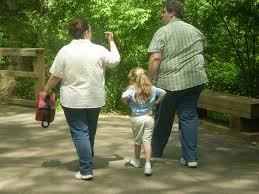 Last weekend I noticed a billboard on the highway that read:   Obesity is a disease, it is not a choice!   Nice way to avoid responsibility--put the blame elsewhere.   This billboard was promoting a weight loss program (not a bad idea, but a misleading headline!)  Remember the days when the main excuse for weight gain was "it's a hormonal problem, I can't do anything about it"  or "it's in my genes".   Yes , there are some hormonal issues (e.g. hypothyroidism)  and genetics  that can predispose you to  weight gain.    However, the rise in obesity and its associated health problems far surpasses the number of people who have a hormonal or genetic problem!

In a recent Chicago Tribune interview given by Dr. Donald Lloyd-Jones at Northwestern University about heart disease ( a major outcome of obesity), he points out that "your lifestyle and behavior choices can trump much of genetics."    As far as thyroid conditions, the number of people with thyroid problems averages about 16% of the population.   And some thyroid conditions actually make you lose weight.

"We’ve been dealing with the obesity trend for the past three decades, but the impact we project on blood sugar is a true shock,” said Donald Lloyd-Jones, MD, chair and associate professor of preventive medicine at Feinberg. “Those are some really scary numbers. When blood sugar goes up like that all of the complications of diabetes come into play."

Less than five percent of Americans currently are considered to have ideal cardiovascular health. The modest six percent improvement in cardiovascular health that is projected for 2020 means better cholesterol and blood pressure numbers for Americans and fewer smokers. Improvements in treatment and control of cholesterol and blood pressure with medication and declines in smoking would partially account for this small boost, but they wouldn’t be enough to offset the weight and diabetes problems Americans face. Projected improvements in diet and physical activity also contribute to the six percent projection, but the absolute increase in Americans who consume ideal diets will remain less than two percent by 2020, if current trends continue.

“Since the 1960s cardiovascular disease death rates have substantially decreased, but if the weight and dysglycemia trends continue to grow past 2020, we are in danger of seeing those overall numbers start to reverse,” Mark Huffman, a cardiologist at Northwestern, said.  Achieving a healthy weight through diet and physical activity is the best way most Americans can improve their cardiovascular health, besides quitting smoking.

Just remember, you can have a bowl of cereal in the morning or a chocolate covered donut.    It's your choice...not some disease.